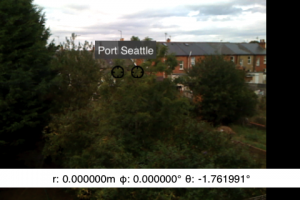 I want to tidy up some of the code before I check it back into my clone of the source, but this is a really good basis for some smart location and direction aware augmented reality apps on iPhone.  Wonder what the iphonearkit license is - it's unclear...

Bugger.  It appears that zac has implemented similar functionality to me already :-(  Bloody github and it's slow (never!) updates to fork queues and network graphs.  Oh well, maybe I won't bother tidying my code.